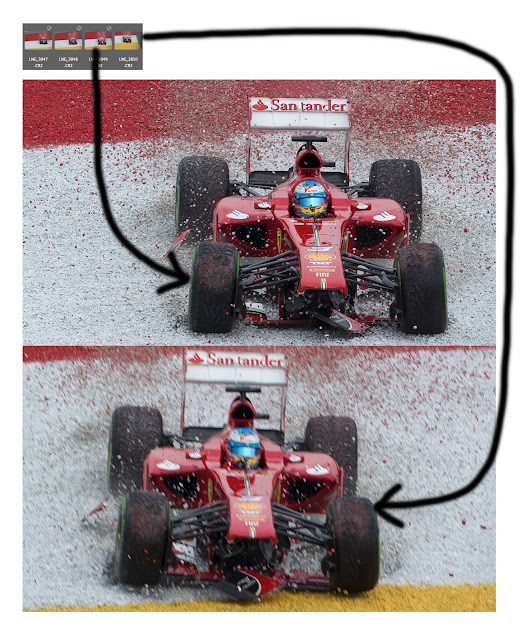 Why was the last image that blur? Because when Alonso went off the track, the crowd in the grandstand stood up, and in a Mexican wave, people stood up from front to back almost in a split second. As I was in the last row, the people in front of me suddenly stood up and as I was firing off the sequence, my lens was obviously knocked. And 1/1000th is not enough for freezing the subject plus freezing the 2-axis sudden movements of my camera/lens combo.

That's what it can't freeze. Remember to check out my webpage www.lioneldudephotography.com for more updates this year.

Posted by Lioneldude Photography at 8:16 AM No comments:

The Extreme Sailing Series was in town over the last weekend, these amazing Extreme 40 catamarans look amazing. I had covered this event back in 2011, however this time I didn't manage to secure accreditation. However, after shooting from various parts of the Marina Bay over the weekend, I can say that shooting from shore is good enough. One important thing for sailing is, these boats need wind! And there wasn't much wind to begin with. With the event held in an enclosed Marina Bay, I wonder how much wind was going to come in. Perhaps next time they need to install giant fans or something. 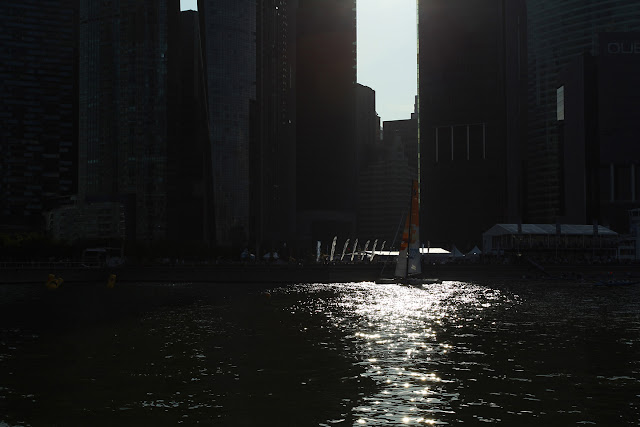 On Saturday, there was this amazing sunlight that went between the buildings, creating patches of light. As in photography, you try to look for contrast in the scene to create dramatic images. Here in this case, I positioned myself in line with the ray of light, and believe me, I waited there for a good 5-10 minutes before a boat moved into the position. 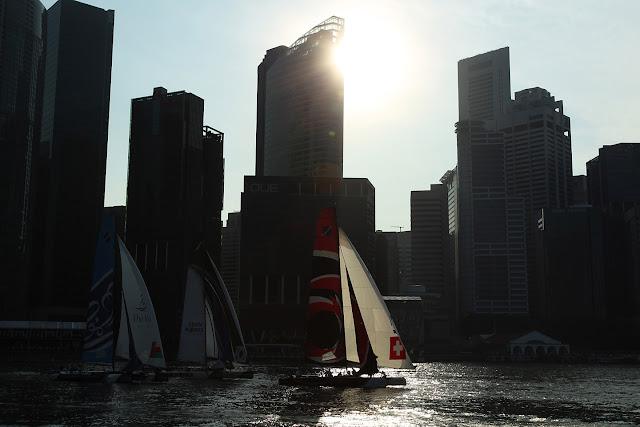 Camera Canon 1D mark IV, 1/800th, f/9, 35mm
This image above was taken just a few moments after the previous, roughly in the same area. The sails were beautiful when they were backlighted by the sunlight, giving it a yellow glow and I have also included the sun between the Shenton Way buildings in this image. 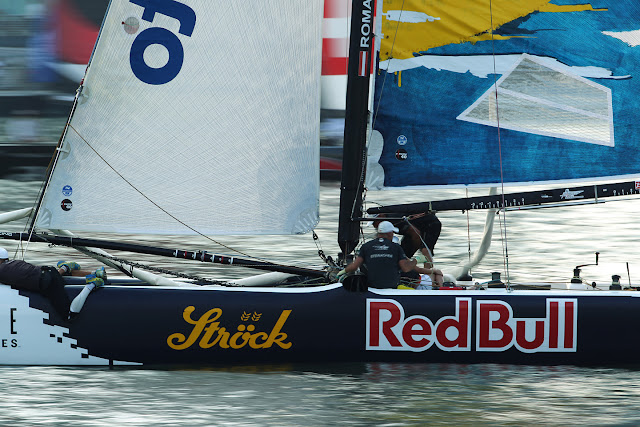 Camera Canon 1D mark IV, 1/13th, f/13, 420mm
Along the way, you knew I would include some of these slow shutter panning images. The trick with slow shutter panning is that the motion needs to be real steady for you to get a relatively sharp image. As these boats weren't very fast due to the lack of wind, shutter speeds of less than 1/15th can be used with a good hit rate. 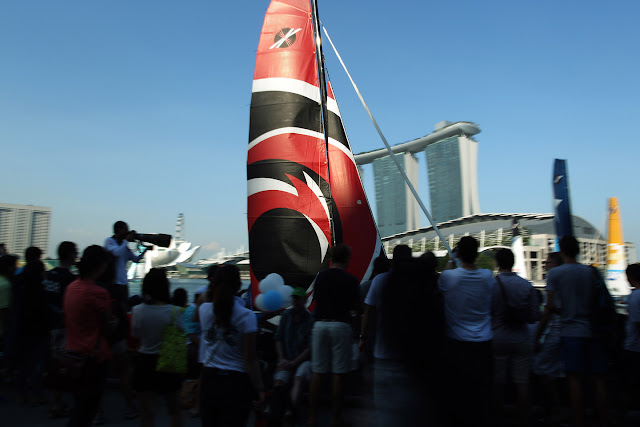 Camera Canon 1D mark IV, 1/15th, f/22, 21mm
A good crowd turned up for this event, this image was taken at the Extreme Village at The Promontory at Marina Bay. The catamarans usually started their races from this point, and here Alinghi actually sails pretty close to the shore. Look at the guy on the left hand holding the big lens! 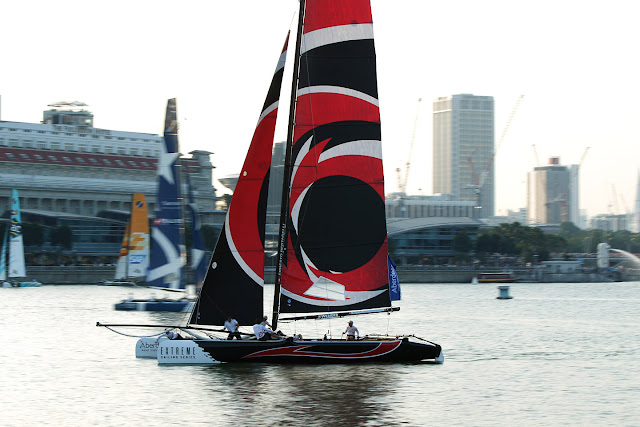 Camera Canon 1D mark IV, 1/13th, f/13, 80mm
This was taken towards the end of Saturday's races, where Alinghi is picking up some good wind. Exposing for the colors on the sail sometimes leaves you with a white background. However, look at the amount of cranes that are in the back of the picture. There's always so much construction going on in Singapore! 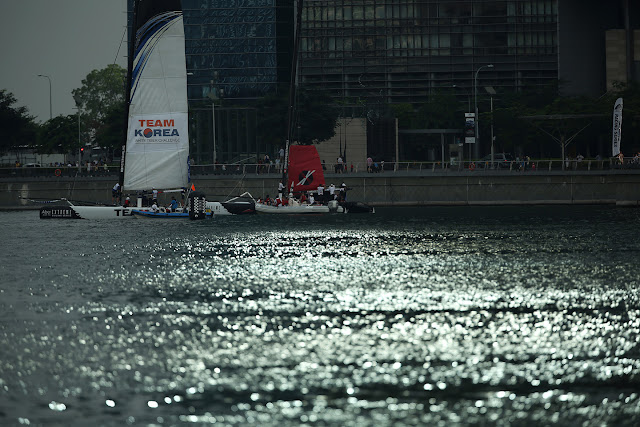 Camera Canon 5D mark III, 1/1000th, f/4, 420mm
This was taken on Sunday, which I went down towards the end of the day's races as I was following the Chinese Formula 1 Grand Prix on TV. Taken from the Merlion park, there was a good blue reflection from one of the Marina Bay buildings. You can see in this image that the teams were already wrapping up the weekend. 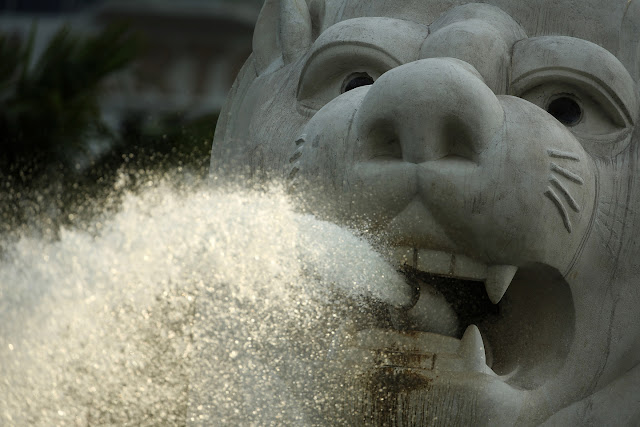 Camera Canon 5D mark III, 1/800th, f/4, 420mm
And since I was at the Merlion park, I have included a tight shot of the Merlion! The water jet stream was illuminated by the setting sun, and using a high shutter speed would freeze the water, creating beautiful patterns that you don't normally see with your eye. It's amazing what the camera sees that you can't see normally and that is the beauty of photography!
Do visit my Flickr page www.flickr.com/lioneldude for more updates on images in Singapore!
Posted by Lioneldude Photography at 9:51 PM No comments:


I had completed my ninth Formula 1 weekend as a spectator, and this was my third time in a row visiting Sepang. Having photographed it for three years in a row from the stands, this time I tried to create pictures that were slightly different and hopefully interesting. The following are some shots that I have selected to show my point of view during a grand prix weekend. 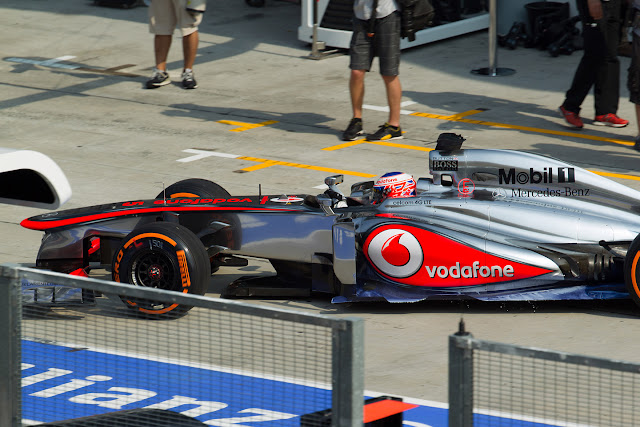 I was on the main grandstands right at the top, facing the team garages to shoot the first 20 minutes of P1 because usually it's just the installation laps during the first half hour of Friday's first session. As usual I like the livery of the McLaren, so when Button emerged from the team garages I just fired away. However I didn't notice the aero paint until a few days later when I was looking through the images. McLaren must have been busy sorting out the downforce issues and evaluating the flow around the sides of the floor! 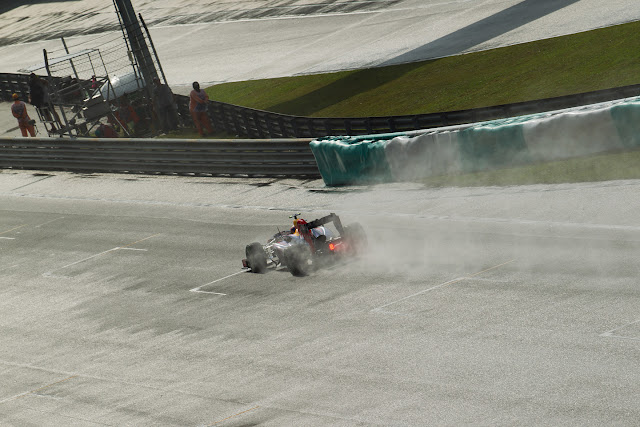 The final ten minutes of qualifying saw the track drenched in a brief rain shower followed by strong sunlight when the pitlane lights turned green. It was as if someone had watered the track for the top ten to test their intermediate tyres, however this was no test session but a fight for pole position. Here, Mark Webber is sprinting to the finish line on the start-finish straight and there's a yellow-golden cast of light on the straight. 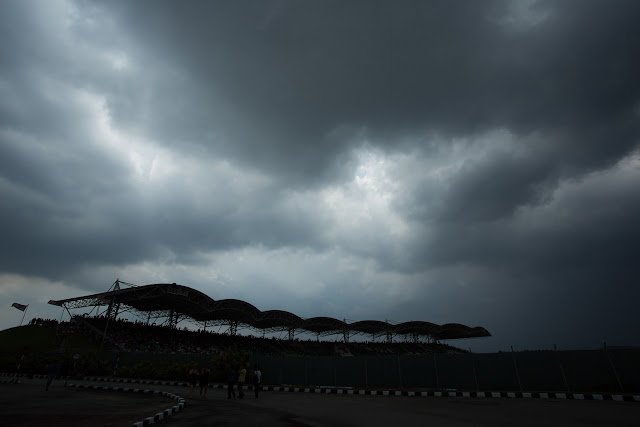 I had arrived at the circuit at 1pm, just three hours before the start of the race. The temperature was scorching hot, as me and my friends were buying lunch at one of the stalls, we could notice the dark clouds forming up. As I made my way to the first corner 1 hour before the start, the storm clouds started to loom over the grandstands and I underexposed this image to give it a slightly more dramatic feel. 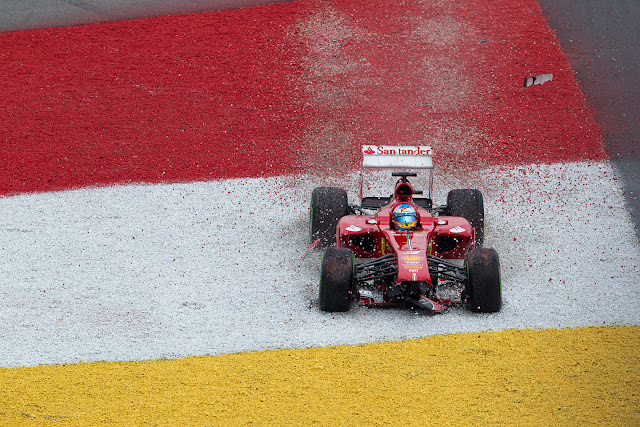 The series of events happened pretty quickly for this image. Initially I was following Sebastian Vettel in the lead, as he had pulled a gap. In the next instant, I saw Mark and Fernando side by side across the line and I switched my focus to that pair. And the front wing broke. And then Fernando just couldn't stop, and he went straight into the gravel trap. And the crowd suddenly stood up and I had no more chances of taking any more pictures as I was right at the top in the last row! 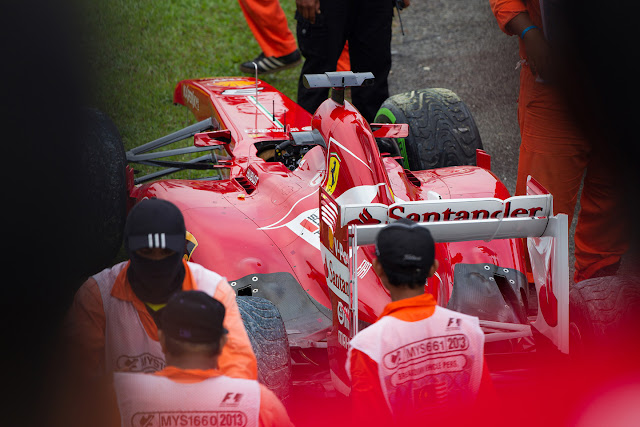 As soon as we knew that Alonso was beached in the gravel, I rushed out onto the slopes at the side of the grandstand to get pictures of Alonso's Ferrari. Now there was quite a crowd gathered near the front all trying to get pictures of a stationary Ferrari and at the same time, the marshals were quick to put the car onto a flatbed truck and cover it almost immediately, so there was not much time to jostle into position to get a clear shot. I used a long lens and tried my best to shoot through heads, and I got this image of a nicely framed between two people! 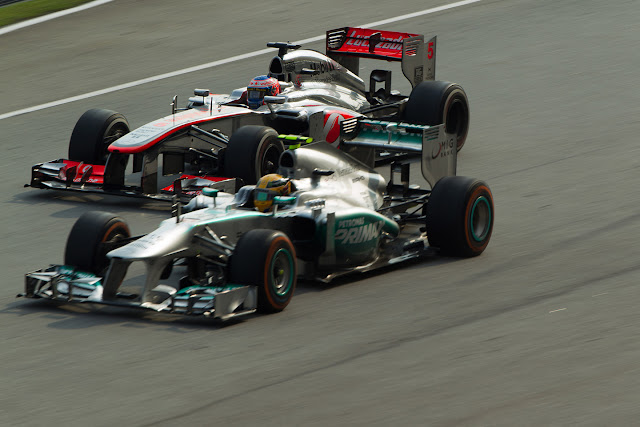 \This was taken on the back straight where I was trying to use a slower shutter speed on cars that were averaging 270kmh at this point. I usually try to spot which cars are trying to overtake each other and then I try to fit two cars in the lens. This image of Lewis passing his former teammate was really funny, as everyone else had thought that Lewis had gone to Mercedes because they had given him a better deal. However it is good to see how he had pushed Mercedes to become one of the faster cars of 2013, and it's really surprising that McLaren are struggling with their current car when they had one of the fastest cars at the end of last season, and the team have admitted there were internal discussions if they were to switch to last year's car at some point in this season. 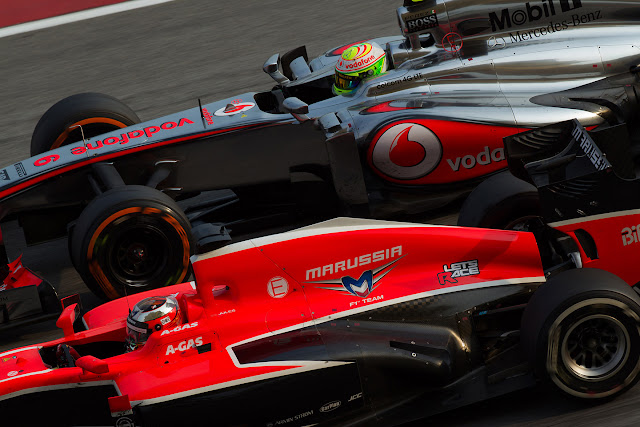 In the closing moments of the race, proceeded to the last corner, and went up to the top level of the tower grandstand. There would be cars who would be struggling towards the end, so I was looking out for wheel lock-ups and that sort. However I saw a Marussia trying to pass a McLaren and I just fired away. It sort of sums up the problems that McLaren had, and to be passed by a backmarker unlapping himself just made their day worse.
Posted by Lioneldude Photography at 9:43 PM No comments: